You cannot place a new order from your country. États-Unis

Connexion compte client
Première commande ?
Je crée mon compte
Création de compte
Is my bottle to be opened and in accordance with which dishes
Retour

NAME ONLY THE GENIUS OF THE PLACE, THIS ENERGY THAT COMES FROM DEEP DOWN LIKE A SCREAM.

Complantation is the art of mixing grape varieties in a terroir. It is the oldest form of viticulture known before the appearance of clones and the depletion of biodiversity. It ensures regular harvests by creating a complex and naturalist ecosystem. Conducted with a real respect for life, our vineyard is planted with the 13 Alsatian grape varieties, driven, harvested and pressed together, vinified with patience and without inputs. 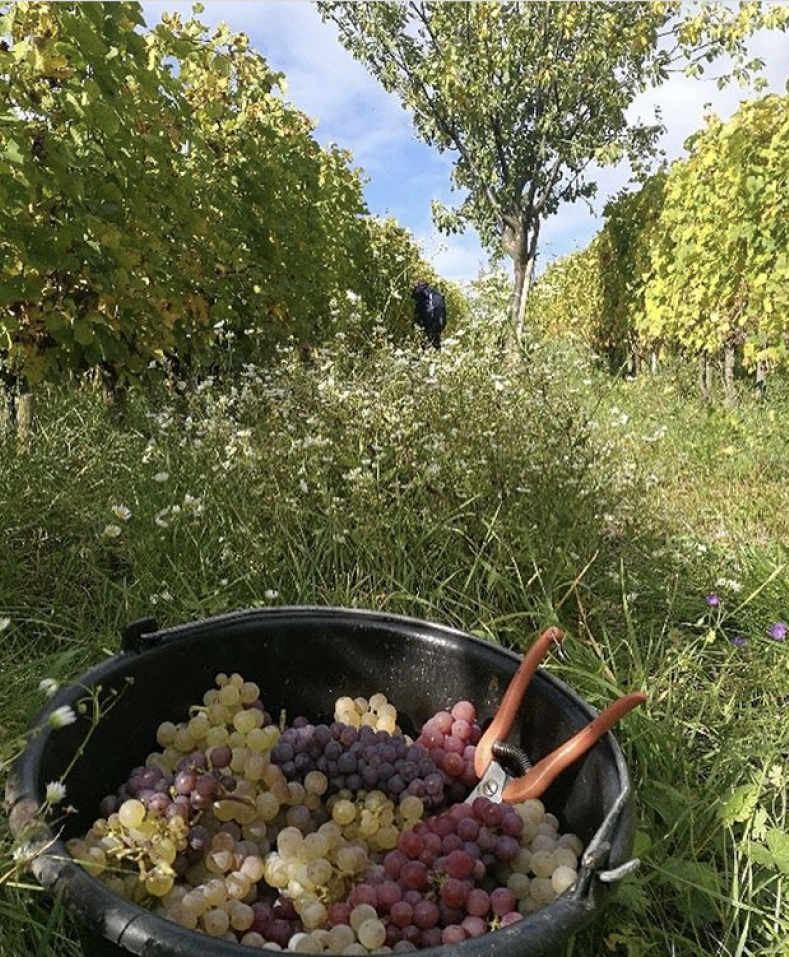 Complementing began unknowingly at Domaine Marcel Deiss in 1984, when the Preiss family from Mittelwihr took over the Grand Cru Schoenenbourg planted after the First World War. This vine, officially planted with Riesling, proves to be complex, rich in numerous particularities including small circular areas planted with various mixed grape varieties, some of which are unknown. From the summit path there is a sort of representation of intertwined Olympic rings. The vine is very rustic, very intriguing, intensely qualitative, spectacularly regular, and if the differences in facies, bearing and phenotype of the vines are numerous in the spring, they fade away at maturity, the grapes suddenly submerged by the majestic taste of the place. The blind berry tasting organised in the 1990s proves that it is difficult without the visual aspect to distinguish the grape varieties at full maturity. These intriguing observations do not fit in with the very "New world" Alsatian doxa that would like the grape variety to keep its taste no matter what and that the contribution of the terroir remains mysterious, marginal, difficult to interpret, to the point of allowing many voices to simply deny its contribution and its very existence.

As a matter of course

Little by little, this model of winegrowing is imposing itself in our eyes as the means to allow the Terroir to dominate the grape varieties and to impose its taste and tactile architecture in a sovereign way. In 1990 we planted the first modern vine totally planted and mixed without order in Alsace, on the Altenberg de Bergheim grand cru terroir, entrusting the place itself with the definition of its original taste setting. In doing so, by deliberately omitting varietal information on the label, or proportions, we enable and facilitate our customers' innate recognition of the terroir's characteristics. As a matter of course, we let the real character of Le Lieu, previously hidden under the impeccable uniform of the varietal Saint-Cyrien, clearly appear: How to understand and accept that Riesling can finally become a heavy, sticky, thick, sometimes cumbersome object in places like Burg! It is only by going beyond the varietal framework that the public can feel the major contribution of the terroir.

60 signs at the service of the Place

During this decade, we will gradually learn that this complantation, first mixing the 13 traditional Alsatian grape varieties and then gradually adding the 47 old orphan vines present in Schoenenbourg, will form on certain terroirs an alphabet of 60 signs serving the place, constituting the first form of intrinsic viticultural biodiversity: we have finally freed ourselves from the constrained and unnatural framework of monoculture wine growing! Little by little we have completed this work of biodiversity with biological soil management, Biodynamics, under-cover sowing, agroforestry, and concern for bees and birds. After the Covid-19 pandemic, a new adventure began: that of the viticulture of the living, where the farmer becomes even more observer than actor, where heavy interventions are banned, where mechanization becomes the exception. To lead the vine in cordon, on a totally covered ground, satisfying himself with the yield of the place itself, linked to the innate fertility shared between all the covers, all the legitimate hosts of the soil, mushrooms, bacteria, plants, animals and men mixed together. The wines resulting from this approach will deliver unknown sensations, flavours to be rediscovered, an obvious naturalness, a new virginity!

The historical role of complantation, or crowd planting, is not well known to the public. Indeed, to fully understand complantation, one must go back to the time when winegrowers were still peasants, and not "wine growers". The first notable difference lies in the question of self-sufficiency: before the recent progress in agriculture in the last century, plant material for wine growing, to use modern terms, had been selected with little technical skill. The varieties (grape varieties) were very varied, and there was a great deal of variation in susceptibility to coulure. At that time, Europe did not know the question of "modern" diseases (mainly mildew and oidium, imported from the United States with the first rootstocks), so the question of losses due to coulure was THE central issue! And the logical, peasant answer, known for centuries, was to plant the different "mixed" varieties in the field: the losses of some were then compensated by the production of others. The following year, under different flowering conditions, the balance was reversed! Time has returned the proportions and selection characteristic of the place, but never in the "modern" purity (100%) of a single variety, far too risky technically for the winegrowers' livelihood. Let us recall in passing that historically the winegrowers were the poorest farmers: they worked in the least fertile places, the vines being cultivated on poor soils (limestone, schist, granite, etc), or on steep slopes (where marl can also be found), and above all "failing" to be able to plant another crop! Thus, as time went by, and well before the legal texts of our modern appellations were put in place, it was a question of local wines above all, not being able to name the wines other than by their origin, for lack of pure grape varieties! Thus, the meaning of appellations must be clearly understood: far from creating place names, it was above all the fruit of a desire to protect winegrowers from usurpation, and to a second extent, to "protect" them from globalisation, globalisation, already well underway at the time! The disappearance of complantation as a majority cultivation method can be attributed to two major reasons:

- the disappearance of the historic vineyard by phylloxera, which opened the way to further varietal research, hence the door to a "rationalized" and massive replanting from clones. The oldest vines, pre-phylloxera, and of course planted in mixture, are still found in the appellations where some sands are present (and where phylloxera could not therefore contaminate the plots). Naturally, the modern text of the appellation having then been adapted to these historical situations, we can see that it allows the production of wines both "pure" or almost "pure", and with a large number of grape varieties. Châteauneuf du Pâpe is a famous example of this! - Finally, the second factor is the gunpowder factories, which had no use for it after the Second World War, and which have found a very practical use in the food shortage that marked the post-war period: the production of the first industrial fertilisers, whose manufacture is known to be very close to that of gunpowder, and whose combination with the first herbicides, contributed to a considerable increase in the vigour of the vineyards. For for the complantation, it is essential to understand that the yield is the only key to harvest the plot at a sufficiently homogeneous maturity. Indeed, the more vigorous the vines are, the greater the differences between the grape varieties; conversely, the less vigorous the vines are, the more the maturity advances at the same rate, due to the natural limitations imposed by the terroir.

NB: we can also think that historically, over-vigouring never existed before herbicides and fertilizers, as the plants were always in competition with each other, or at least with the surrounding grasses, which the winegrower removed as well as possible by picking the plots (twice a year, which was far from giving a result related to the current herbicides, which are also synthetic, just like fertilizers). Finally, the last explanatory factor for the interest of complantation, which is not well known, but which the latest studies gently highlight: communication between plants! It is therefore important to understand the plant as a living being: that is to say that it communicates with its fellow creatures, in a language of its own (root exudate, hormone secretion, etc.).

Thus I am persuaded that a complantation is a "large family", which lives together, communicates together, and finally has a group behaviour that surpasses the behaviour that each of these grape varieties would have individually (what happens when a grape variety is planted alone, or surrounded by... itself (clones) ! The idea of a terroir in harmony with the vines that grow there, and which would therefore mark the "family" then takes on its full meaning!

Are you looking for a specific vintage? Contact us